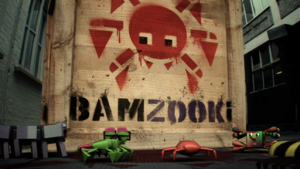 Our Film and Post team delivered another fantastic CBBC series for the BBC. Bamzooki Street Rules (13 x 28 min) presented by Barney Harwood and Gemma Hunt features four teams of three contestants competing with their Zooks in tests of speed, strength and agility.

Zooks are virtual creatures created by the contestants using 3-D primitives designed by Gameware Development. Fans could download the Zook kit from the CBBC website to create their own Zooks, compete to enter the leagues and gallery of most viewed and downloaded Zooks.

Our post-production team worked closely with the CBBC team to bring to life this new twist on the hugely popular children’s series which started in 2004 as an in-studio virtual Robot Wars. In its fourth series, ‘Bamzooki Street Rules’ pumped up the scale of the Zooks and increased the stakes for the competitors by taking their virtual creatures to outdoor as well as indoor challenges.

During game-play, the contestants shout commands to their Zooks to control their creatures as they battle it out for glory. The competition starts with an outdoor street race that shows off the augmented reality element of this clever kid’s series. Our editors created picture-in-picture effects to help viewers keep track of the action and tie-in the identity of each Zook with its team. Once the Zooks cross the finish line, the teams enter the secret Bamzooki headquarters to compete in progressive levels of challenges like sumo bouts, capture the flag, obstacle courses, elimination rounds and a final roof top race.

Our post-production team edited, graded and composited together the many, varied components to enhance the augmented reality experience for viewers.

Bamzooki Street Rules was broadcast on CBBC through February 2010.

Talk to a LEAP Producer about how to overcome your post-production challenges.