Following a challenging period for the retail and hospitality sectors, creative agency M&C Saatchi wanted to help promote and protect the independent businesses in their local community. They created the GoGo Soho campaign to encourage locals and other Londoners to (re)visit the unique Central London neighbourhood. As part of the multi-channel campaign, the agency wanted to make a strong impression with bold artwork on display in Soho and beyond. To bring to life the print element of the campaign, they enlisted the expertise of B-Print, LEAP’s creative services studio for the advertising community.

GoGo Soho is supported by the Mayor of London’s office and brings together more than 20 local businesses under one creative umbrella. B-Print produced 200 cling film stickers to stand out in shop windows as well as a series of A3-sized display boards and accessories for hanging in retail outlets around Soho. These elements helped to tie together the support Soho message, but the most exciting challenge for B-Print was the GoGo Soho takeover of the M&C Saatchi building itself. 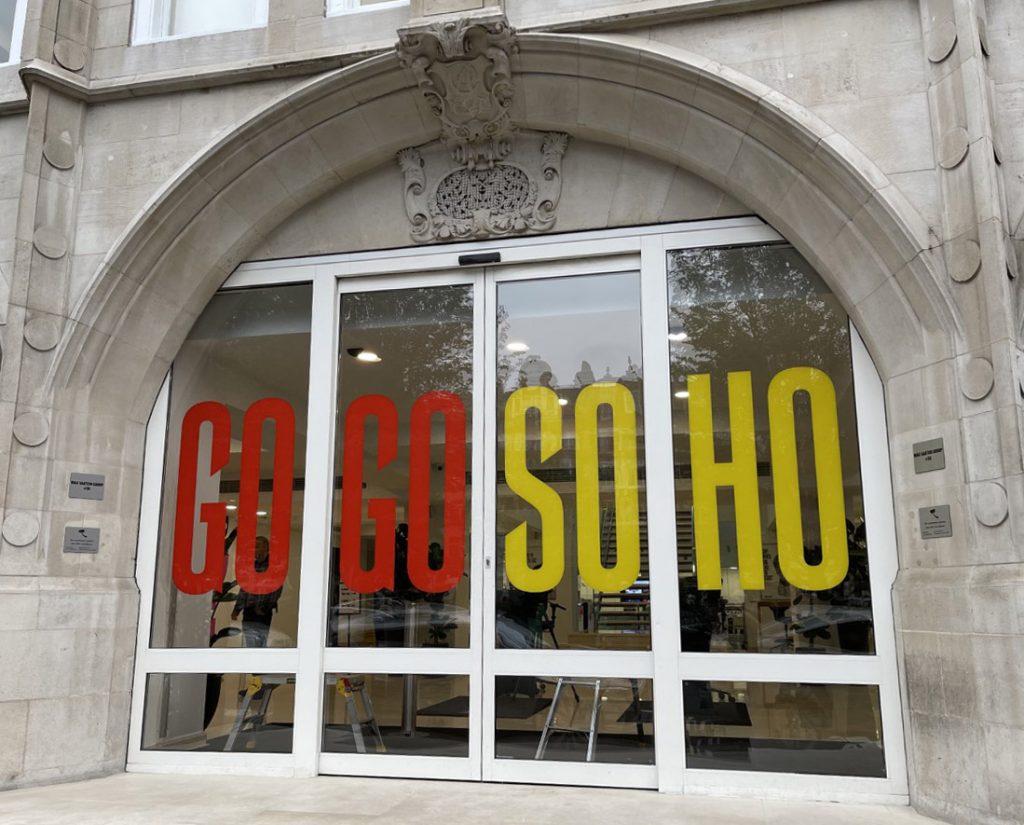 B-Print, formerly known as Adam B, has a history of service to the advertising industry that dates back to 1967. Decades of experience have taught us that the first task of any large-scale display is to fully get to grips with the site itself. For the GoGo Soho takeover, it meant understanding that building-sized outdoor displays often require road closures and cherry pickers, but other solutions produce impactful results within a shorter turn-around time and with far less disruption. 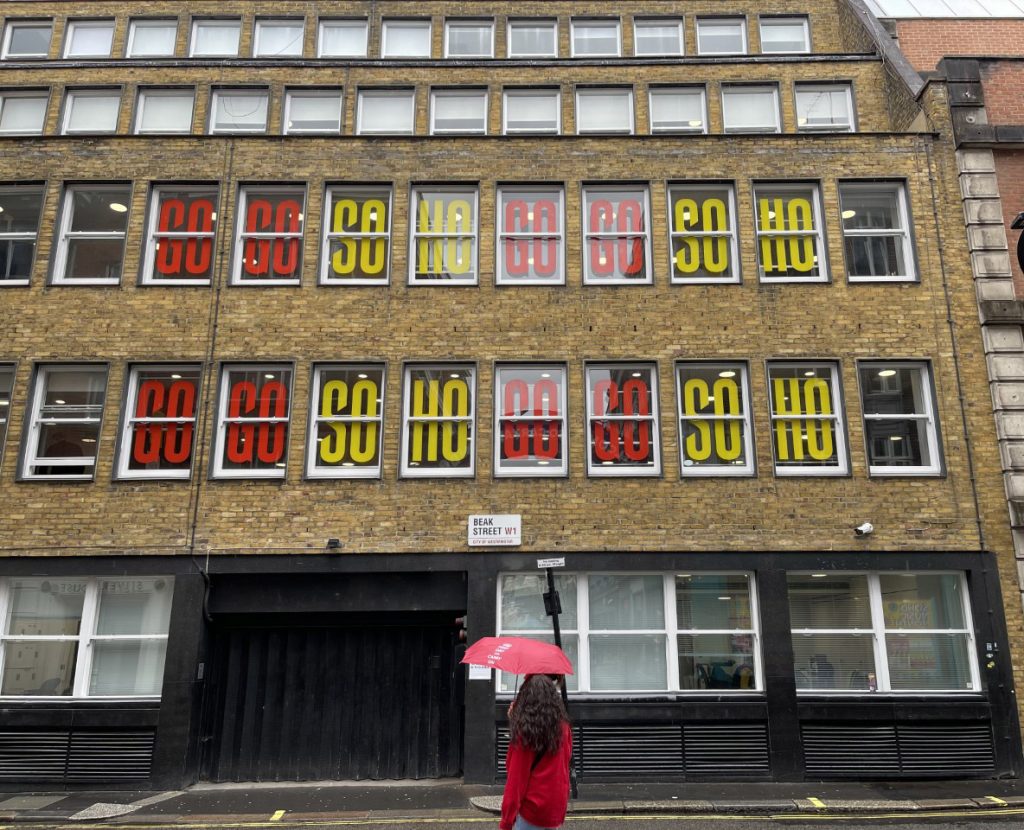 The clients wanted to fill 16 windows facing Carnaby Street with GoGo Soho graphics. B-Print’s print services consultant needed to find a solution that would maximise visibility, minimise disruption and protect the thin glass from breakage during the artwork’s eventual removal. We recommended more vibrant colours for an indoor installation that would really pop for their outdoor audience. We also suggested removing the artwork’s background to allow in more natural light and a gentler adhesive to protect the fragile sash windows. 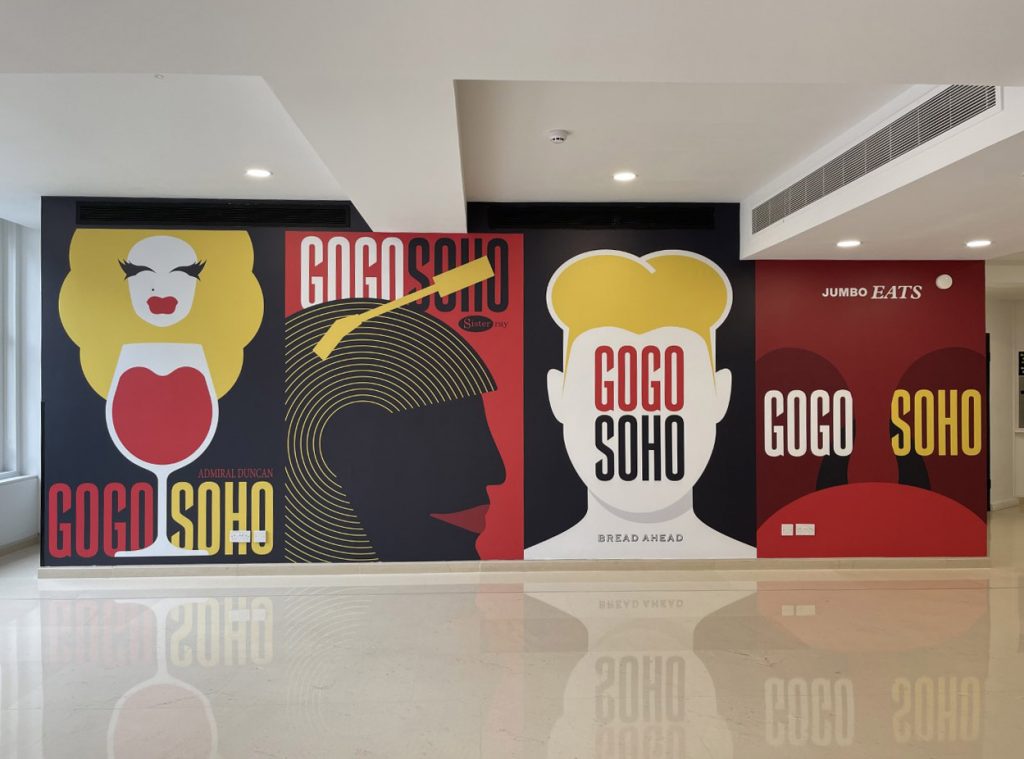 For B-Print’s installation display experts, the most important part of any job is taking accurate measurements. Everything progresses or falls apart from there. Our consultant also recognised that the super-fast turnaround time for this project wouldn’t allow for the removal of old graphics and repainting of walls prior to installation, so we selected a special material that allowed the GoGo Soho display to be pasted straight over without any show through. At our Woolwich-based printworks, B-Print produced the 7m long, 3m tall graphic in one piece to avoid unsightly joins. The team were able to skilfully apply it to the client’s feature wall, circumnavigating air conditioner vents and an irregular ceiling structure.

Starting at 5 am on a Monday morning, B-Print’s installation team ensured M&C Saatchi’s 16 windows, reception area wall, and A0 framed lobby artwork were ready to greet the agency’s staff as they walked through the GoGo Soho branded doors of their building.

Looking to make a powerful impact with print installation displays?

Speak to our colleagues at B-Print.

Advertising and Marketing Events in August 2021