Are you beach body ready? What we can all learn from Protein World’s ad campaign

Although to many it may seem impossible to find any good points about Protein World’s recent controversial advertising activity, there are a few…

The bright yellow ads plastered all over the tube are unashamedly bold, in every sense of the word. The main colour chosen is the brightest: a loud canary yellow. The typeface used is the boldest: large black sans-serif caps. And of course, the model of choice, Renee Somerfield, poses in a “Come and get it, if you dare” posture – shoulders and hips back, chest out and head slightly raised in an inviting yet challenging way. Basically the ad is confident, attention grabbing, disruptive, unapologetic. The ‘Rihanna’ of advertising, if you will. If you’re going to say something, say it loud and proud.

As all marketers know, word-of-mouth advertising is priceless. The result of this provocative advert is conversations, and isn’t that what all brands want to happen with their audiences? Good adverts are those that get noticed, talked about, shared, and written about (like now). Not only has the controversial ad prompted conversations on the tube platforms, but it has also translated to the online world, with hundreds taking to their social media accounts to share their support or disgust, depending on which side of the fence you are.

As conversations heat up and turn into more lively debates, brand advocates will emerge as the haters hate, strengthening both your following and opposition. Best of all? The majority of the opposition would probably never be interested in trying a product like theirs anyway, so there is no real loss there as far as the brand is concerned. Unlike many, they are not trying to be all things to all people.

Protein World reportedly made over £1m in the first four days following the campaign launch, resulting in a 400% ROI. The proof is in the (low-fat) pudding. 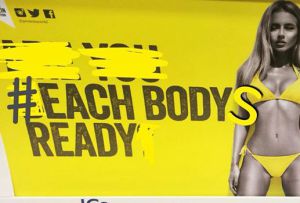 As the haters took to social media to share their disgust at the ad, the online world took a collective gasp at Protein World’s shocking responses.

To one ‘average’ woman who shared her negative views on Twitter, the brand rhetorically asked: “Why make your insecurities our problem?” Ouch.

To another girl sarcastically asking the brand whether she would be let in at the beach despite not looking like their model, they vaguely replied in an equally sarcastic manner, sharing tips on how to lose a few pounds with their products. 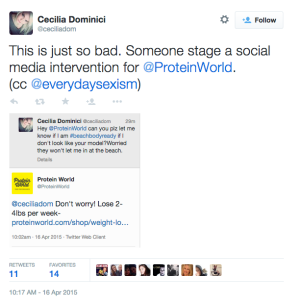 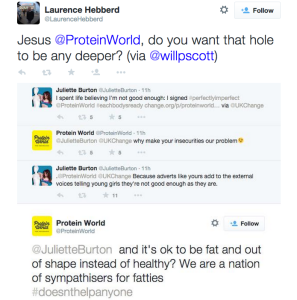 The way the negative backlash has been handled has been, needless to say, unprofessional, shocking, and insensitive. But. One has to admit they have been fantastic at ensuring brand consistency. Some may even stretch to “integrity” (Why Protein World is reaping the rewards from its ‘genuine integrity’, Marketing Magazine). The way they speak on Twitter is, if you think about it, how you would expect after seeing those ads.

Also, kudos for not backing down at the first sight of negativity. This fearless, brash and bold approach is totally in keeping with the brand voice, so for that reason, they truly uphold their brand values.

In pursuit of the perfect body, no matter what

750,000 people in the UK suffer from an eating disorder, women in particular. 89% of that amount, to be precise – with a prevalence in teenage women.

Young, susceptible girls are over-exposed to ‘perfect bodies’. All. The. Time. And now, in this information-overload age, it’s not just on the TV or in magazines; it’s on their Instagram feeds and YouTube and Twitter news streams. It’s hardly surprising that this constant saturation sends the wrong messages about body confidence. Of course the Protein World ads aren’t entirely to blame, but they do contribute to guilt-tripping young women for the sake of commercialism.

UPDATE: 01.07.15 “While the ASA banned Protein World’s controversial ‘Beach Body’ ads due to health and weight loss claims, after launching a further investigation into the campaign’s effects on body image the ASA has decided that the ads are ‘not irresponsible’ and ‘unlikely to cause offence’.” – Marketing Week

What do you think about Protein World’s advertisement campaign? Join the conversation on our Linkedin and Twitter.