Culture Shocks: Why Air France Took The Little Prince To The Skies

Lie-flat business class seats. First class compartments with en suite showers. Gourmet meals. Bottomless champagne. Most airlines know that business travellers are essential to their bottom line. Therefore, most brands make smart investments in cabin comfort in order to stay competitive. But is it smarter to also reach out to a wider section of customers, even those who rarely (if ever) pay for a seat? Since airlines usually operate under thin profit margins, marketing teams must think creatively. Appealing to the culture of a particular customer through savvy social media engagement is one way to promote a brand.

Take Air France as an example. In a whimsical campaign, Air France reached out to its youngest flyers so they could help the airline promote a new partnership. The French flag carrier asked kids to draw pictures on a theme devised to celebrate the release of Mark Osborne’s film The Little Prince—a story based on the 1943 novella of the same name by the famous French writer and aviator Antoine de Saint-Exupéry.

The theme titled, “draw me The Little Prince and an airplane,” let children submit their artwork to Air France in exchange for the chance to win prizes. The airline then promoted its new cadre of young artists by posting their artwork in response to customer questions on the Air France Twitter account. 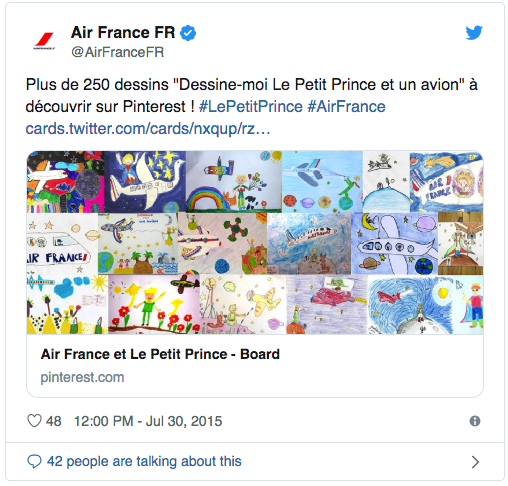 Other ways Air France sought social engagement included reaching out to film buffs by allowing them to submit scripts in honour of the Cannes Film Festival. In another campaign, Instagrammers who posted pictures with the hashtags #IamOnAir and #AirFrance could win a chance to take control of the Air France Instagram account in celebration of summer travel.

Aside from meeting the expectations of the partnership between the film’s marketing team and its own brand, Air France managed to pull a kind-of social media trifecta: content generation, customer engagement as well as cultural awareness and reinforcement.

In spite of the ultra-modern aircraft that whisk passengers from one side of the globe to the other, flying these days, sadly, seems more of a chore than the travel adventure it used to be. But social media can help alleviate some of that apathy by democratising business and allowing the consumer to drive the brand, especially when a campaign has emotional resonance.

By initiating campaigns like its drawing contest for the The Little Prince, Air France shows that it doesn’t see social media as an incomprehensible monolith. Instead, it’s a demonstration of customer engagement through a unique and creative angle, giving consumers the chance to connect the brand through a shared cultural experience.

For cross-cultural and global social media solutions, please get in touch with our Language and Culture Account Managers.

Johnny Depp is the face of SAUVAGE, the new fragrance from Dior